We spend an awful lot of time as Christians ‘casting out’ bad habits and ‘rebuking’ bad manners.  More often than not,  miracles come not in a dramatic scene in the front of the church, but in the privacy of our everyday lives.  Sometimes deliverance is a matter of getting out of bed,  making the coffee, opening the front door, and facing the world. It may be making a phone call,  an appointment, or actually opening the bills, and possibly even paying them. Not as romantic, maybe, but to the legions of demons waiting to stop us (lest, God forbid, we overcome those bad habits and actually do something with our lives) much more threatening.  Sudden miracles do not generally make for mature, wise people.

So, instead of screeching “I rebuke you!” with pointed finger, and mock authority to everyone who irritates us, let’s just relax.  A little bit.  Take a breath, count to ten, or whatever works for you, and let it go.  Save it for the real battles; they will come.  Tearing down strongholds is tedious work, and requires facing some harsh reality.  That shouldn’t mean being harsh with each other.  Or ourselves, for that matter.  A little grace goes a long way

“For the weapons of our warfare are not carnal, but mighty through God, to the pulling down of strongholds; casting down imaginations and every high thing that exalts itself against the knowledge of God.” 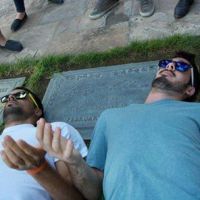